QD TV the future of TV!

Quantum Dot television sets are not rolling off anyone’s tongues just yet. But, do watch this space. You may have heard of OLED TV technology and there is a chance you’ve heard the QLED TV phenomena too?

As things stand at present, the OLED TV technology is considered better than QLED TV, according to some consumer reviewing magazines and various industry experts. This might be the case, for now. But the tiny little stroke in that “O” that makes it a “Q” could change things on its head, a few months or years down the line.

You see, the Quantum Dot has the capacity to become a game changer. It is nothing more than a microscopic particle with the power to revolutionise image quality.

South Korean technology giant, Samsung, has already created a QLED TV technology for the market. This range of technology has its advantages but it cannot stand in the same league position as OLED. However, secret work is under way that could revolutionise the eventual winner between these two technologies.

You may remember when video cassettes were first on the market? And we had that choice: Betamax or VHS. It appeared in the very early days as if Betamax might just win the race for market dominance. Then suddenly, and out of the blue, Betamax sales and hiring of video imploded. VHS quickly soaked up and blew Betamax out of water.

A similar war of technologies could actually go down a strangely familiar path. OLED TV v QLED technology. To better understand the Quantum Dot phenomena, you need to know that QLED is the very first stage of the QD (Quantum Dot) revolution. A bit like reel-to-reel tape for holding data was the pioneering beginnings of cassettes, VHS tapes, DAT recorders, iPods and eventually apps for playback of entertainment media.

The revolution has already started, but you may not know it. The Quantum Dot is about to become super cool. This is because of the sheer minuscule size of the molecule. A molecule that can glow when fed with energy.

The Size of the Quantum Dot Matters

The size of the dot determines whether it glows at a specific wavelength. A small dot might glow green, whereas a larger one may glow red. If we look at the Quantum Dot TV technology that exists today: it utilises a thin layer of dots in front of blue LEDs, which in turn create a blue light.

The dynamic of the blue light gives out energy, as well as the actual blue colouring you see within the TV screen. So, the energy is thus created to give off green and red colours (the other primaries) giving you all three simply by running power to an array of dynamic blue LED panels.

So, the future of TV technology is not just going to be bright, but a little confusing as well. Quantum Dot technology could be confused with OLED, ULED, QUHD and whatever other acronyms bombard us at the local computer retailer.

Flying cars will dominate in the future 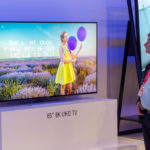 Is 8K the Future of TV Technology?